The #metoo movement has raised awareness about women's experiences with physical and emotional safety in the work environment. Increasingly we are hearing from women leaders, inventors and innovators that this is just the beginning.

As many women have been speaking out about situations where their physical and emotional safety were at risk due to abusive treatment, others are beginning to address more subtle ways that women are held back from full engagement in all of our institutions and disciplines -- from business and technology to entertainment and politics. These barriers include disrespectful treatment, lower compensation, limited access to funding, power dynamics and having opinions dismissed because they are different than those in the prevailing culture.

In order to be not just safe but truly effective -- and ultimately to impact our global institutions -- women need and deserve more.  We were inspired by Abraham Maslow's "Hierarchy of Needs" (c.1943). Maslow's hierarchy is a pyramid that has at its base physiological needs (food, shelter) and moves up to safety, love/belonging, esteem, and self-actualization.  Our Women's Hierarchy pyramid moves up from physical and emotional safety to respect, equal pay, equal influence and ultimately the opportunity to change the way our global institutions operate.

Above is a draft we are working on and request your ideas and support to complete. We'd like examples of barriers today to put in the clouds at the left. For example, barriers to respectful treatment are ways that women become sidelined with subtle gender-based criticism, such as "too soft" or "too emotional." (We rarely hear men called "too emotional," even when they are known for angry outbursts or impassioned speech, such as Sir Winston Churchill, who was praised as having emotional intelligence and emotional resilience due to his strongly expressed feelings that some believe turned the tide of World War II).

We'd also like examples of a better future where women's lives and therefore global institutions are improved to put in the sun.  How will that that future look?

Please send your ideas about our Women's Hierarchy pyramid to eileen@visualinsight.net 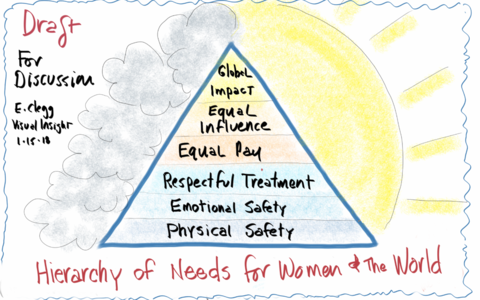 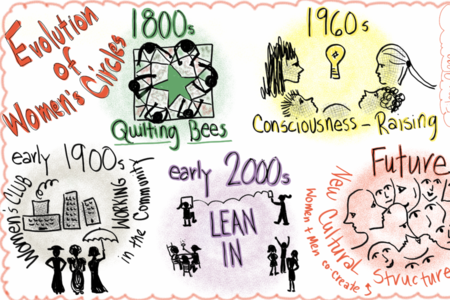 We assembled a cross-disicplinary, cross-industry group of women leaders to address the question:  How do we, as women, design meetings so that all voices are heard and are represented in our decision-making?  In our ongoing effort to close the "knowing-doing gap," we convened this group of women to drill down into what we can do to better amplify women's voices.  The visual above is part of our answers--provide immediate visual results of meetings!

the History & Future of Women Changing the World 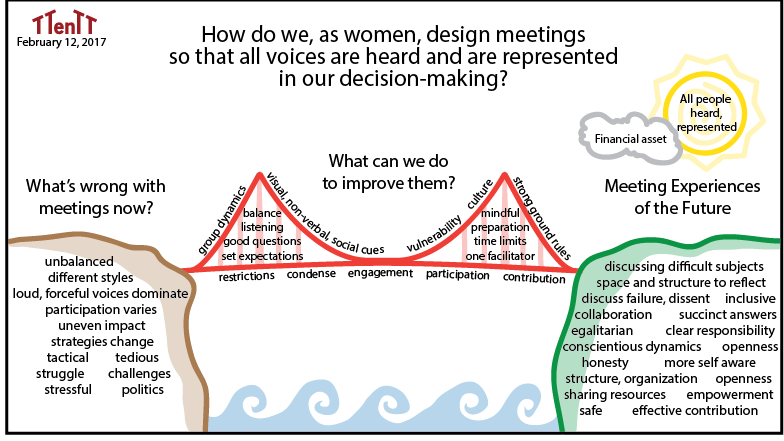 Our big picture history mural is delivering insights for the future as we begin to identify transformational patterns.  For example, changes in women's status often followed periods of dedicated conversations among women.  Some of these cultural trends are depicted in the graphic above:  The quilting bees of the Agricultural Age were practical gatherings to create warm bed-covers but also served as a gathering place for women to support one another in their hard life as farmers. In the early 1900's, "women's clubs" emerged ostensibly as a way to socialize, but became places where social change began as women tackled community issues including poverty, child labor, and challenges of sudden urbanization of the family. In the 1960's, women emerged from the challenges of the domestic 1950's by gathering to talk about their feelings, aspirations, creativity, politics and commitment to have impact in a world at a time when most institutions were led by men. As women became integrated into the mainstream of work at the close of the 20th century, many systemic drivers of the gender-gap still persisted but there was a taboo against talking about the differences men and women.  In the 2000's, new discussions began about gender differences in values, approaches, personal interactions, goals and needs.  The "Lean In" movement launched by Sheryl Sandberg provided a way for women to dedicate themselves anew to the conversations necessary to make change.  Now we are looking at the next phase.

We have heard a number of promising ideas and practices, including new forums where men and women speak openly to one another about gender-related issues at work, speaking up about previously taboo topics, exploring sources unconscious bias. Now that we have some insight into the new edges of change, we are conducting surveys--both in history and in the present.  The history surveys involve mining the stories of significant women inventors and innovators to learn more about how they thrived amid the constraints of their time. The current surveys are designed to elicit, in detail, how new cultural structures are being developed to close the gender gap. We believe these new structures will involve conversation spaces where women support one another, men support one another, and women and men work together on social transformation toward a balanced society.

As part of our commitment, we are listing various organizations and what they are doing to help solve the problem — through networking, research, education or other avenues. We are not endorsing these organizations but listing them as a starting point to help people who may be looking for certain types of support, information, or education about gender issues.

To solve the urgent and complex problem of women’s empowerment, we need to work together. Here are some organizations:

Association for Women in Computing​

Association for Women in Mathematics

Association for Women in Science

Women in Business and Industry